With the 18th Amendment, Right to Education became an inalienable right of every child in Pakistan. Though the Right to Education Act was passed in 2010, access to quality education remains an elusive dream for many. In order to bring about meaningful reforms and address the grave issues confronting the education sector, PCE has been regularly engaging with members of the government, policy makers and legislators. Equity in education, financing of education, girls; education, teachers’ capacity building, reform of curricula, teachers’ absenteeism, provision of basic facilities as a priority have been recognized as areas of concern that the Government must address. 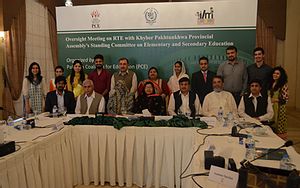 PCE holds various consultations at district, provincial and national level in order to engage government functionaries at all levels and involve the duty bearers and right holders in a direct dialogue and debate session. At these meetings, PCE advocates for equity in education with a special focus on mainstreaming the marginalized and disadvantaged groups of the society in accordance with Sustainable Development Goal 4 ratified by the government of Pakistan. Recommendations are put together as a charter of demands that are shared with legislators and policy makers for debate and endorsement. Follow-up letters are disseminated and new advocacy campaigns are initiated each year to draw focus on education as a fundamental right of every citizen. 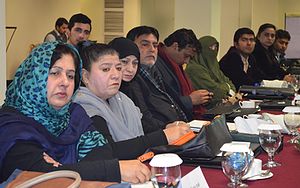 PCE aims to empower communities so that demands can be converted into actions at the local level. To encourage citizen participation, PCE has been sensitizing communities at the grass root level through interventions and local volunteer groups. PCE was able to facilitate the formation of People Action Group for Education (PAGE) in Ghotki which now exists as a direct coordination loop between duty bearers, service providers and right holders as recognized by the social welfare department. Members of the group were selected on volunteer basis through consultative meetings held at the district level. The group has representation from Local Government, District Education Department, School Management Committees, parents, Head Teachers and members of the Media. 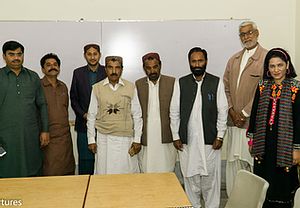 Since its inception, PAGE has held numerous meetings in District Ghotki and was able to achieve tangible results in a short period of time. PAGE has successfully devised seven School Improvement Plans and continue to coordinate with DEOs to help identify schools that need infrastructural repairs. Furthermore, PAGE has been engaging media and was able to air 7 news reports through ARY news regarding the deplorable condition of schools in Ghotki. PCE’s member HWA foundation has been providing the necessary logical and technical support to ensure that the group continuous to make sustainable efforts with regards to Education in Ghotki.

Pakistan has an alarming rate of out of school children, 22.8 million, second only to Nigeria. To ensure development in political or economic terms, it is essential that this number must be significantly reduced. Since the 18th Amendment to the Constitution was passed in 2010, efforts need to be enhanced by the government in order to implement Article 25- A in its true letter and spirit. The Article 25A of the Constitution of Pakistan recognizes education as a “basic” right of the citizens which makes it a justiciable right, whereby the court can exercise its power and its judicial authority to ensure that these fundamental rights are not being violated. It stands to reason that the implementation of this Article would reduce the number of out of school children.

PCE filed public interest litigation cases in January 2013 through a professional law firm demanding the implementation of the RTE. The petitions are aimed at urging the executive to implement the existing constitutional right to free education throughout Pakistan in a transparent and timely manner. They were filed in three Provincial High Courts. Petitions filed in Khyber Pakhtunkhwa (Peshawar High Court) and Punjab (Lahore High Court) focus on the implementation of RTE; whereas the petition in the Islamabad High Court demands promulgation of secondary legislation based upon minimum standards, to serve as an example for the provincial education authorities.

Recent developments in the Peshawar High Court have been encouraging. In the proceeding of the court on 18th July, 2018, the Honorable Judge noted that continuous efforts need to be taken to ensure free and compulsory education for all. He further said it is the primary duty of the government to provide proper facilities to school-going children and that efforts should not be limited to the confines of education department at secretariat level. All DEOs were thereby ordained by the court to inspect schools in their respective areas and submit reports accordingly. The Honorable Judge also outlined the poor performance of the students from government schools in matriculation exams and directed the Secretary Development to submit a detailed report regarding the poor results in SSC examination.

UN reporting on Privatization of Education

PCE has been working tirelessly to draw attention to the unprecedented growth of private schools in Pakistan as a violation of Human Rights. In 2016, PCE developed a shadow report titled “Privatized Education in Pakistan and the Right to Education: A right out of reach?” with the support of Global Initiative for Economic, Social and Cultural Rights (GI-ESCR), ASPBAE and seven national CSOs. This report was presented to the United Nations Committee on the Rights of Child (UNCRC) at its 72nd Session for its consideration of the List of Issues for Pakistan.

The Committee comprised of child rights experts and informed by PCE’s shadow report, questioned Pakistan on its failure to adopt legislation implementing the right to compulsory education in the province of Khyber Pakhtunkhwa in particular and in the territories of Gilgit-Baltistan and Kashmir. It raised concerns about the poor enforcement of right to education legislation in provinces where such legislation does exist. The Committee was also alarmed about the privatization of education and in particular, the lack of measures to ensure the compliance of private schools with minimum educational standards, curriculum requirements and qualification for teachers. Connected to the above issues, the Committee was concerned about the extremely low budgetary allocations for education.

It was a success for PCE and internationalist national and international partners to be able to effectively persuade the Committee to ask such pertinent questions based on its shadow report.

As a continuation of PCE’s ongoing efforts aimed at regulating privatization in education, PCE presented its report ‘Neglected Financing and Privatization of Education in Pakistan: Right to Education out of reach?’ to various diplomatic missions in Islamabad prior to the 28th session for Universal Periodic Review in November 2017. The consultations were used as a means to highlight the various issues in provision of private education, such as segregation based on the power of affordability, increased divide between haves and have nots, poor state of low cost private schools, elite schools and the unregulated fee structure, public private partnerships and new brand of low cost religious private schools with an unmonitored curriculum. The diplomatic missions were urged to present the unsubstantiated growth of private sector in education as a major cause for concern in the UPR session and highlight the need for this issue to be rectified at the earliest.